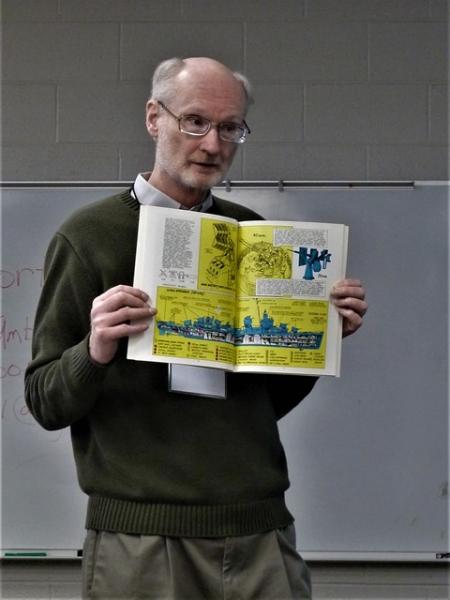 Doug Rose taught War and Literature at SUNY Canton for over 20 years before retiring in 2005. He previously offered "Poetry of the Great War" for SOAR in Fall 2012. He continues to research 20th century wars and has written a series of poems about World War II

Doug's lifelong interest in comic books inspired him to create and teach the popular course “Comic Books as Literature” at SUNY Canton from 2001-2008. This included Will Eisner’s Comics as Sequential Art and The Best of The Spirit as required reading for his students. Doug began reading comic books when he was five. He puts the blame for becoming an English professor on this pastime. While teaching at SUNY Canton, Doug assigned his students comic books to read as part of their writing and literature courses. In 1999 he created and began teaching ENGL 217: Comic Books as Literature. Doug is now retired, but he still loves to read and talk about comic books.

In 1969 Doug, sporting cool sideburns, began his sophomore year at Morrisville Ag & Tech College where, as a budding English major, he began paying closer attention to the chaotic changes in the world. Forty years later, his freshman composition students at SUNY Canton read and wrote about the significant impacts that remarkable year had on our nation and the world. He always looks forward to groovin’ and talkin’ ‘bout the ‘60s generation with his peers.