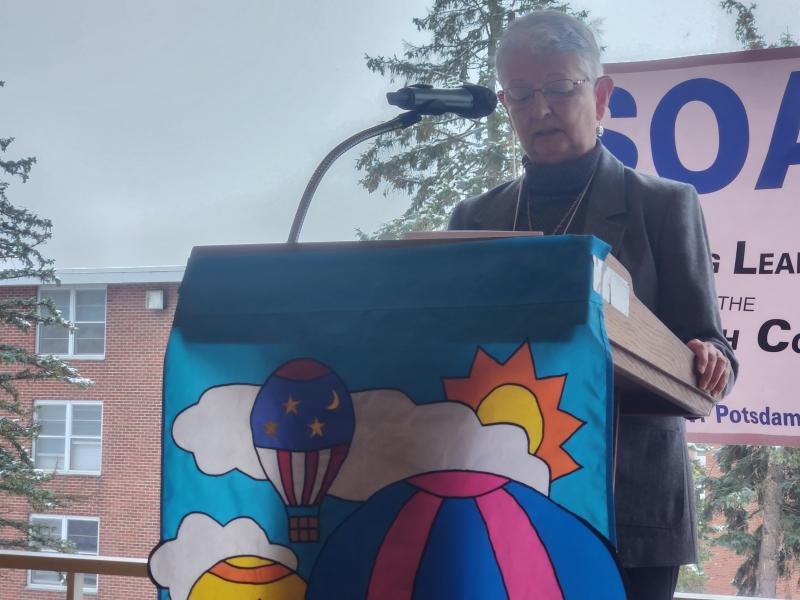 Board Member Lyn Swafford also gave a moving speech of remembrance, portions of which are given here:

We who served on the SOAR Board of Directors with Jim Barry were shocked at his unexpected passing this past June. We felt that, although we have lost other members significant to the growth and purpose of our organization, Jim in particular should be remembered for his huge contributions to the mission of SOAR: Lifelong Learning in the North Country.

Here are some of Jim’s thoughts, written in 2008, about SOAR, taken from his recently published book Downstate, Upstate Memories.

Quoting Jim: “I was a newly minted retiree in the summer of 2001. Many people asked what I was going to do in retirement. I started noticing advertisements for SOAR popping up in newspapers and on the radio. SOAR was described as a local Elderhostel for people who wanted to reenter the classroom as learners.

In the fall of 2001, I received literature on the [14] SOAR courses available, mailed in a $55 check for the yearly membership fee and signed up [for] courses on Writing and Museums.

In classes, I enjoyed finding out about topics I knew little about, but even more so, I enjoyed the camaraderie of fellow learners.” End quote.

Jim joined the SOAR Board of Directors in early Spring 2002 at the request of Neil Johnson, one of the founders of SOAR. That same fall, Jim offered the first of the 15 classes he taught for SOAR over the next 20+ years.

Later in that semester, Bill Cullen, another of the original SOARers, asked Jim to join his Curriculum Committee, the group of people responsible for developing course lists for each semester and then recruiting people to present them. The rest, as they say, is SOAR history!

In the early years as Co-chairs of the Curriculum Committee, Jim and other fellow BOD members (Arliene Oey in 2003, Bobby Gordon in 2004 and Ed Russell in 2005) gradually increased the number of courses each year. Jim’s record high number of classes occurred in the Spring semester of 2019 – a total of 67!

Going back only to the spring of 2015 and moving forward to the fateful spring of 2020 when we had to cancel the rest of the semester, the BOD approved Jim’s lists of 683 courses offered to our members during those 10 semesters, an average of 62 a year! Here’s a story about how some potential presenters felt when they saw Jim coming toward them when he was out and about or when they saw his name on their caller ID: “Oh man! It’s Jim Barry! I know he’s going to ask me to teach a course, and he’s not going to take NO for an answer!”

As you know, SOAR instructors teach for free and receive a recognition luncheon at the end of each semester. Jim added a small incentive that he affectionately called “mugging” the presenters. That tradition continues to this day in one form or another.

Here’s a quote I must share: Jim “asked perennial SOAR teacher Aileen O’Donoghue, ‘Why do you keep asking to instruct courses for us?’ She replied, ‘I would never get between my college students and the door with a minute left in class. I could get trampled! However, you SOAR people are still asking me questions well after the class time has ended. I love it!’”

Many of you will remember Jim’s sense of humor, his love of puns, daily cartoons in our emails, and his antics at our luncheons. Some scenes that Jim recalled are when he wore a multicolored lab coat and a floppy top hat. He writes that in the mid-2000s, he convinced then BOD Chair Barbara Trerise to feign displeasure with his antics by chasing him around the room with a ruler or a baseball bat!

Jim ended his essay with these words: “SOAR has come to provide not only subject matter for our members, but equally importantly, a way of socializing with fellow seniors. I am glad that I hooked up with SOAR in retirement. As my buddy Neil Johnson enjoys saying, ‘Keep SOARing!”’

You keep SOARing, too, Jim!

Remembering Jim Barry
SOAR was honored to remember Jim Barry at the SOAR Fall Luncheon with a moving speech by Lyn Swafford.
Leon LeBeau Educator SOARing Award presented to Mark Coleman
SOAR honors Mark Coleman at SOAR Fall 2022 Luncheon.
Outstanding Contribution to SOAR Award presented posthumously to Jim Barry
SOAR honors Jim Barry at SOAR Fall 2022 Luncheon.
HOW DO I NAVIGATE THE SOAR WEB SITE?
Where can you find what on this web site? Why should you visit it often?